No one was looking for her: to survive two nights in a crevasse

Of all the miraculous survival stories, the ones that amaze us – rightly so – perhaps most concern some people whose inexperience, combined with a certain level of incompetence, are completely unforgivable.

Here, this is one of those stories. Those where the classic “beginner’s luck” was truly striking.

Yet we have all been beginners: in Trekking, Survival, Climbing, Tracking or any other activity. We were so because it is inevitable, and because you always learn from mistakes, if you come out alive.

This is the story (recent, dating back to last August) of a Russian tourist residing in Germany, whose personal details have not been reported in the major newspapers.

Everything goes wrong from the start for the woman. We are located near the Grenz glacier, at an altitude of 4000, on the northwest side of Monte Rosa.

At least, we know that she would have gone badly, given her clothing: in short shorts, without crampons, ice ax, ropes and without additional garments to shelter from the cold. The prelude to an almost completely assured tragedy.

At the end of August the tourist leaves from the Monte Rose “Hutte” refuge (altitude 2883 m). The owners and other hikers notice her, and strongly advise her not to continue without success: in fact, the woman continues towards the glacier, where the inevitable happens.

“So far, so good”, she must have probably thought her. So far, so good. But under the Colle del Lys a narrow and deep chasm engulfs it, making it slide 15 meters deep, over a snow bridge that softens the ruinous fall.

NDR: here is the real photo of the chasm where the tourist fell 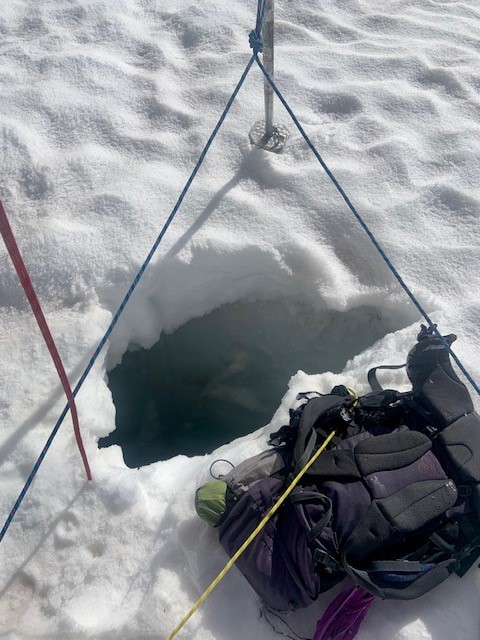 From that moment his boldness and his light clothes are overwhelmed by the cold, by the darkness, by a grim silence.

Nobody started looking for her, not having revealed her intentions. By melting the ice in her mouth she spends the first night. But with the arrival of the day still silence, still cold. Hypothermia advances taking her towards the second night.

The next morning, some mountaineers hear moans and immediately call Air Zermatt.

The woman is even found in a state of mild hypothermia (34 degrees).

“We have never seen such a bailout in the last 20 years. It was a miracle,” Air Zermatt later states on its Facebook page.

“Being unharmed in the fall certainly facilitated her, because if she had had a trauma and lost consciousness, hypothermia would have manifested itself more clearly. Instead, being able to move somehow, maintaining some muscle activity, probably she managed to keep the body temperature at not too low values ​​”said Guido Giardini, head of the mountain medicine clinic at the Aosta hospital.

Accidents in the mountains are unfortunately common, and only our experience, knowledge of our limits and respect for the mountains can mitigate them and allow us to overcome them in the best way.

Bivo is with you. As part of your experience, as a resource and as a tool to overcome difficulties when they arise as unavoidable.

If you don’t know Bivo and are curious to try it, use the discount code “KYTWALKEN” to be entitled to a 10% discount on the first purchase!